I’m a Worcester guy. I have been all of my life. I love Worcester, its size, its location, its neighborhoods. Sure, there are things that we can improve, but I wouldn’t trade our city for any other in New England.

As a Worcester guy, I have always found it hard to understand why we have trouble getting people outside of our city to pay attention to us.

Former Providence Mayor Buddy Cianci once told me, “You guys have a real inferiority complex.” Perhaps. Maybe that is because unless someone dies, the media usually ignore us.

I remember one day, when I was a young city councilor, I was watching the TV news to get an update on an approaching tornado. Channel 5 weatherman Dick Albert told viewers that he thought Boston was going to miss the eye of the storm. “Well Natalie,” he said to news anchor Natalie Jacobson, “if the storm stays just to the west here, we should be all right.” As he was speaking, he drew a line with his finger on the map straight through the city of Worcester. I remember calling the station and angrily telling the station manager that his weatherman was rooting for the tornado to go through my house.

Despite the lack of media attention, Worcester has a great deal to offer. I could never understand why businesses were reluctant to locate here. First, Worcester is in the center of New England, at least the portion that has actual people living in it. It is easy to get in and out of, with good highway access and no Boston-sized traffic jams.

Second, housing is inexpensive. A 3,000-square-foot home in one of our better neighborhoods is equal to the price of a closet in greater Boston.

We have access to great colleges, and our children can attend good public schools.

You get all of this for a tiny fraction of the cost of locating a business in greater Boston. Certainly, there are those businesses that want to take advantage of the sizeable population in the Boston area. But, a manufacturer, a financial or service company, or a software or biotech company can locate anywhere.

Slowly, over the past several decades, Worcester has been building an infrastructure of development projects that are making a visible difference in our city.

The expansion of UMass Medical School and the biotechnology park happened over time. Then came Medical City, the convention center and Union Station. Step by step, we added pieces to our puzzle: a hotel here, a new courthouse there.

In recent years, the arrival of the pharmacy school and Hanover Theatre has pumped new energy and brought thousands of people into our downtown.

The key ingredient to success, in our downtown, is putting people on the sidewalks. For Worcester to have a real downtown, we need all kinds of people, of all ages, residents and visitors, going to and from somewhere.

Residential development projects downtown, including CitySquare and conversion of the old courthouse, will add 532 new apartments. In addition, new hotels at CitySquare and Washington Square will help attract hundreds of new visitors downtown. All of these additions will likely spur the development of smaller supporting businesses that will give the downtown a vitality that has been lacking in the decades since most of our retail shops abandoned Main Street.

Finally, our downtown is starting to change and blossom.

Today, Worcester’s leaders tout $2.8 billion in development projects that have been completed, are going forward or are proposed. OK, the city has padded the list a bit by including public schools and parks. Nevertheless, there are $330 million in major downtown development projects already underway and another $164 million proposed. For Worcester, these are giant numbers. 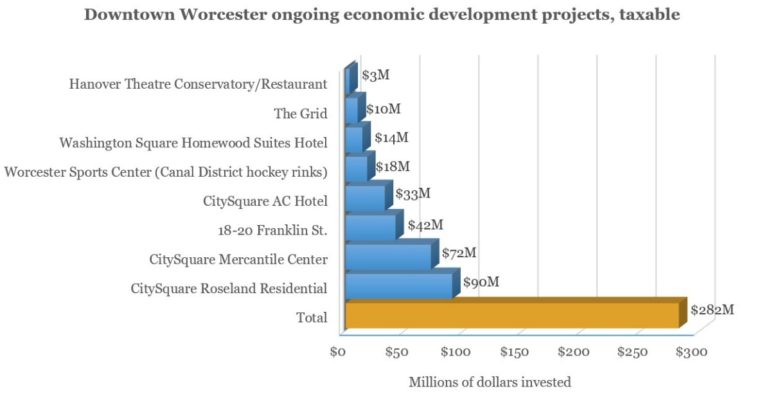 Perhaps more importantly, we have a plan.

Led by its chairman, Vincent Pedone, the Worcester Redevelopment Authority has targeted 24 troubled properties in a 118-acre district that centers on the theater district. Rather than bulldozing an entire area, their plan is intelligently designed to focus on individual blighted properties.

The city’s development efforts are led by the city manager and mayor. But the day-to-day work behind the scenes is handled very capably by attorney Michael Traynor, the city’s chief development officer. Traynor also serves as chief executive officer for the WRA. Traynor is smart and focused. He helped develop the strategy that allowed the city to negotiate directly with developers to fill the South Worcester Industrial Park after an RFP produced no takers.

City leaders have been fortunate to work with community partners who add real value to our development team. The Worcester Business Development Corporation, headed by Craig Blais, is a behind-the-scenes juggernaut willing to take on the toughest projects. Without the WBDC’s help a number of key projects, notably Gateway Park and the redevelopment of the former Telegram & Gazette building downtown, would never have happened.

Everyone is focused. The Economic Development Coordinating Council meets every Friday. Made up of the Chamber of Commerce, the WBDC, Massachusetts Biotechnology Initiatives and city officials, this group reviews each project and every opportunity. The Chamber handles the tough assignment of business recruitment, led by Sherri Pitcher, senior director of business development.

It hasn’t always been perfect. Sometimes, in our drive to find a project, any project, we settle on a less than desirable deal, such as the one we negotiated when CSX expanded its rail yard, destroyed a potentially valuable section of the east side of Worcester and clogged local streets with trucks. Nevertheless, overall, our track record of solid development projects is laudable and fits with our community’s character.

Development is a painfully slow business. It takes enormous patience and a dogged determination to see a project through from its early vision to completion. The people in charge of development in Worcester are moving our city, however slowly, in the right direction.

Recently, a friend invited me to his office on the 15th floor at 100 Front St. From his office, you could see the dramatic and exciting changes to the city’s landscape and our downtown.

The public dollars invested and the tax breaks given to developers are an investment in our future. With each project, we add jobs, expand the tax base and strengthen our community. We may never get the media attention that a capital city like Boston or Providence draws. But with hard work and a continued focus, we can get the rest of New England to see our city as a great place to locate a business.